Merry Christmas to my friend Patrick - this is Alder and Pickles, two characters from his awesome space pirate epic, Calico Jack.
Posted by milkyboots at 11:38 AM 2 comments: 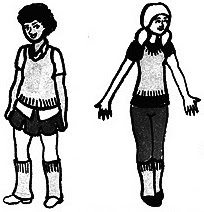 Hey! First of all, happy holidays!
Second of all, I know I haven't posted in awhile - I have been working on semi-secret projects, such as this comic I did for Sadie magazine. There is another big project I hope to have done by the end of the year, so keep an eye out for it!
Posted by milkyboots at 8:46 AM No comments: A couple weeks ago my girlfriend and I got into a discussion about the fate of the queer characters in one of my stories, pointing out that they die about 10 pages after it is revealed that they are queer. It was a pretty interesting conversation and now I am rethinking how my queer characters are portrayed.
This conversation and others about race and gender have led me to want to reexamine all my fiction, so - and I can't remember if I've mentioned this already - there will not be a new issue of The Courier anytime soon because I've found a lot of really problematic ideas buried in it, written by a younger, less educated Virginia. Writing in a way that is responsible is something that is absolutely necessary to me, now, and I want my writing to be something healthy and realistic for people who aren't necessarily represented that way in a lot of fiction.
Anyway, as an apology to my girlfriend, I drew the two queer characters being very sweet, open and alive together. I am still thinking about how to rewrite them.
Posted by milkyboots at 4:08 PM 1 comment:

The State of Virginia